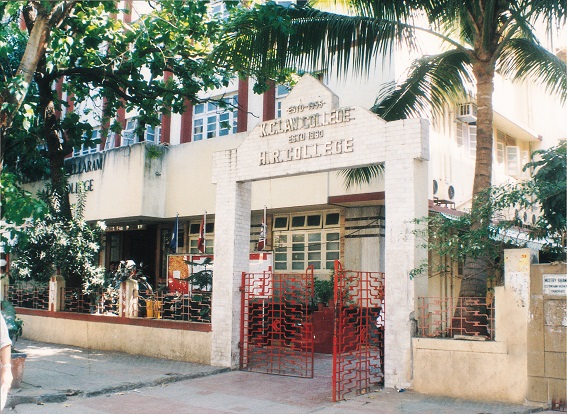 
It was the historic day of June 20, 1960 that saw the doors of Bombay’s newest College of Commerce & Economics open wide at dawn. The city, back then, wasn’t so populated, and the Principal wondered if he would have enough students to fill his classes.

History shows that classes filled up soon enough! Located on 123 Dinshaw Wachha Road, at the intersection of the road that faces the University of Mumbai, with its imposing clock tower, the College was founded on idealism.

Seth Hassaram Rijhumal Principal H.C. Malkani Principal K.M. Kundnani, Jyotu Kundnani with Principal H.C. Malkani While the seed of what is today known as the Hassaram Rijhumal College of Commerce & Economics was planted in Hyderabad Sind (formerly undivided India), in 1945, and it was, perhaps, the first commerce college there, although another commerce college was also started in the same year in Karachi, the fledgling Institution had to be hastily forsaken in the storm of Partition.

Uprooted and felled as their spirit was, the foresighted and feisty founding fathers of the College were not about to give up easily, and certainly not in their mission to create an educational institution of lasting value once they migrated to Mumbai (then Bombay) and attempted to restart their lives again. The trials were tremendous, but so was the tenacity of the many mighty men who were determined to germinate this institutional oak again.

One such visionary was Principal Kundnani who, along with Barrister Hotchand Advani, reconstituted the Hyderabad Sind National Collegiate (HSNC) Board in Mumbai, and set about restarting the two colleges the Board already ran in Sind, pre-Partition.

One was the D.G. National College, which was the very first college founded by the HSNC Board in Sind in 1921,and of which Principal Kundnani was Principal at the time of Partition. The second was the College of Commerce & Economics, started with the financial support of the merchant Bhaiband community of Hyderabad.

An interesting, and not entirely coincidental, fact is that when it first started in 1945, H.C. Malkani was appointed as its Principal - and when the College restarted in Mumbai in 1960, the mantle yet again fell upon the industrious H.C. Malkani, to take on the ‘principal’ role in mentoring and remaking the destiny of an institution that was so closely linked to his own! It was almost as though the two, the College and Principal H.C. Malkani, were a match made with divine exactitude that not even the ruinous Partition could rent asunder.

In the intervening years, between his two stints as Principal of the College, a lot had transpired. Most significantly, the map of the Sub Continent was irrevocably altered, and with it the lives of thousands of dispossessed Sindhis - all of who had to run helter-skelter overnight.